We Need to Talk About the Yield Curve

What is the yield curve and why should I care? The yield curve is a graph of the yields that government bonds are paying, arranged in order of time to maturity. You should care because the cost of mortgages, bank loans, student loans, corporate bond yields, etc., are all set with reference to various government yields. Another reason you should care is that the yield curve can (seemingly) predict the future.¹ It has predicted all seven recessions since the late 1960s. Yes, you read that right. All seven. It did make one bad call back in the mid-60s, so it’s not infallible. If its record continues, there is a chance of a recession sometime either side of Election Day 2020.  Take a deep breath. A recession is not guaranteed. It’s just a possibility we should consider, given the yield curve’s track record. 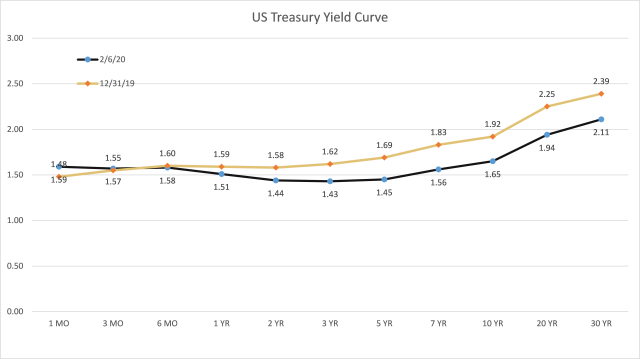 Note that short term rates are higher than many longer term rates.

The curve’s predictive power shows itself through what is called an inversion. The curve is inverted when a short term yield is higher than a long term yield. The usual state of things is that longer term bonds yield more than shorter term bonds.

The Federal Reserve’s preferred measure for whether the yield curve is upward sloping or inverted is the relationship between three month bills and ten year notes (3m10y). That is the one I’m going to talk about. Many market commentators prefer the difference between the two year note and the ten year. It’s a free country. 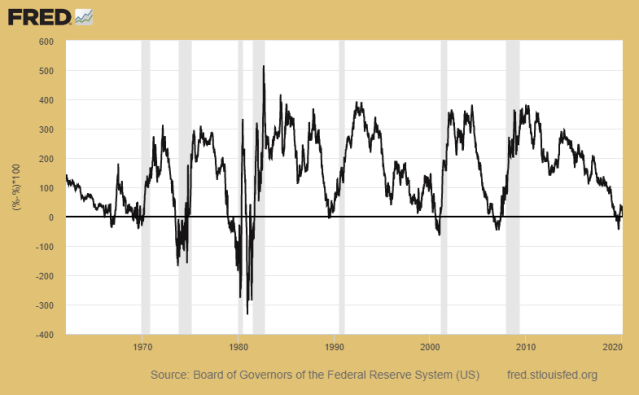 OK, the yield curve has predicted the last seven recessions. That’s great. I can see it in the chart. Why should I care? You should care because recessions usually lead to stock market selloffs.

The stock market sells off during recessions (and at other times).

Now that I know this, can I do something to protect myself if the curve inverts? The answer, as I am about to demonstrate, is yes. Will it work? If the probabilities hold up, yes. But remember, bad calls can happen. And given that the Fed has been running an unusual policy for the last several years, things may have changed. (And, if I say that this is a lead pipe cinch, Miss Scarlet from Compliance will probably hit me with a lead pipe.)

Let’s start. Take out your phone, press down and say: “Siri set a reminder to lower my equity allocation in late September 2020”. Why then? Because the typical lag between the yield curve first inverting and a recession has been around one and a half to two years. The 3m10y spread first went negative at the end of March 2019 and has been flirting with either side of zero ever since.

Seriously, a year and a half to two years? OK, you asked. I split the baby and took the returns of the S&P 500 1.75 years to the day after each day on which the 3m10y curve was inverted and cumulated those returns. I call this the “Pure Inversion” (PI) strategy. Here’s what it looks like: 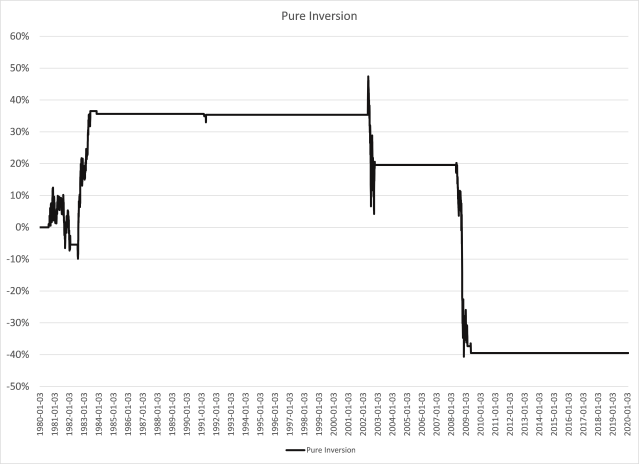 Inversion telegraphed equity selloffs, but adhering blindly to the strategy in the 80s would have led to large losses.

It sort of works! We want to pinpoint down markets and it mostly does, with the major exception of the early 1980s. The strategy hung around too long, losing about 35%. That was likely because the yield curve was inverted for the better part of three years from late 1978 to late 1981 when Chairman Volcker was squeezing inflation out of the system. Equities recovered very rapidly from August 1982 on, proving that you need some risk controls around this strategy. It would have done very well this century, but could still use some work.

I did some of that work. Let’s hit a few of the high points. If you want to know more, contact me.²  I tested three more strategies, plus a combination of two of them. All the additional strategies improved upon PI. “Inversion Count” (IC) improved upon PI by using the signal from an inverted curve only if the curve was inverted for at least ten days in the same month. Creating a persistent signal means that you are less likely to be whipsawed by frequent trading. The overall results were much better, but it still hung around way too long in the early 80s.

I then tried a different tack. I tested two strategies that traded when 3m10y observations were among their lowest ten percent. One of these “lowest decile” strategies used a rolling window that looked back 15 years and the other used a growing window that looked back at the entire relationship prior to each point in time.³ Both had better annualized returns than the PI strategy and the “Rolling Window” (RW) strategy had better returns overall. Low decile strategies should adapt to extended inversions by eventually placing fewer inverted observations inside the lowest decile. The RW adapted better than PI to the extended inversion in the early 1980s. It was early for the tech wreck, but did well in the end and it crushed the global financial crisis. Still, it wasn’t great and the strategy was in force considerably longer than necessary. 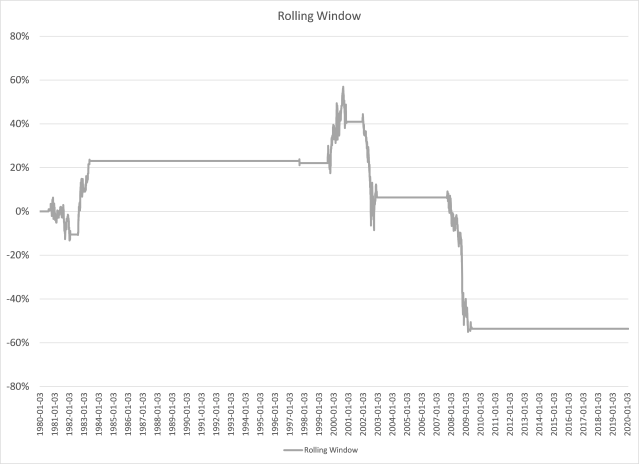 Combining strategies in quantitative investing is often a way to improve your outcome. I thought that the adaptability of a RW plus the requirement of a persistent signal from the IC might be a winner.  It helped immensely, but once again the extended inversion of the Volcker era meant the signal persisted too long. That is not a bad thing. In rules based investing, you don’t want to fit your model to a unique period like the inflation fight of the late 70s/early 80s. Approximately right is best; fitting such a period would likely make you precisely wrong down the road. 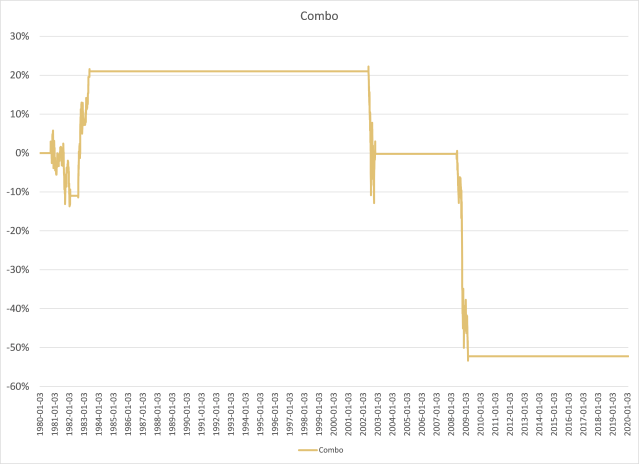 So, is this a strategy that we should follow programmatically? Probably not. The lags are too long and variable and the sample size of inverted curves presaging recessions is small. Is this something to keep in mind? Yes. It has worked well for the last fifty years so should not be dismissed out of hand. In the end, I would keep the reminder that you set via Siri a couple of paragraphs back and decide when it pops up.

¹ I said in https://themarketcyclist.com/2020/01/06/its-time-for-predictions-i-dont-play-that/ that I don’t do predictions. I stand by that. I do, however, monitor indicators that have had predictive value in the past.

³ When dealing with historical data you want to avoid “look ahead bias”, which is when you use data from the future in your analysis. An example of the latter is when you compare a data point in 2000 to the average of a data set that extends from 1980-2020. That average includes data from 1-20 years after 2000, making the comparison invalid. You could not have known that average in 2000.