It’s Time For Predictions; I Don’t Play That

Here we are at the start of a new year and a new decade. Is it really a new decade? Personally, I’m the sort who starts counting at one, not zero, but I’ll go along and say it is a new decade. This sort of thing compels people to predict the unpredictable. Why? (Insert emoji of guy shrugging shoulders and throwing up hands.) I don’t believe in prediction and don’t do it, at least not in public. I do, however, believe in observation and probability. In this spirit, I think we need to talk about the US stock market.

The US stock market had a great ten years. The S&P 500’s (SPX) total return, the one including dividends, averaged 13.56% a year.  Its cumulative return was 256.7%. This was a great run. In fact, it was such a good run that you would have been better off ignoring all the advice about international diversification and just put all your chips on red, white and blue. Any part of your equity allocation devoted to the rest of the world would have earned just 52.4% for the decade or a paltry 4.3% per year.

The US trounced the world in the teens

Back to the part wherein I mentioned that I believe in probability. Adam Butler of ReSolve Asset Management put together this chart showing the actual performance of the SPX over the last decade versus 10,000 simulated performances of the SPX. He used the SPX’s own randomized historical excess return data from 1900 to the present for the simulated returns.

Note that the last decade’s performance is pressing up near the top of the cone. That point represents the 95th percentile of wealth that would have been created under all the scenarios run. Sort of like catching the perfect wave. There is only a 6% probability that this recurs. As a betting man, this is a bet that I recommend fading.

It was not so long ago that US and foreign returns looked like this: 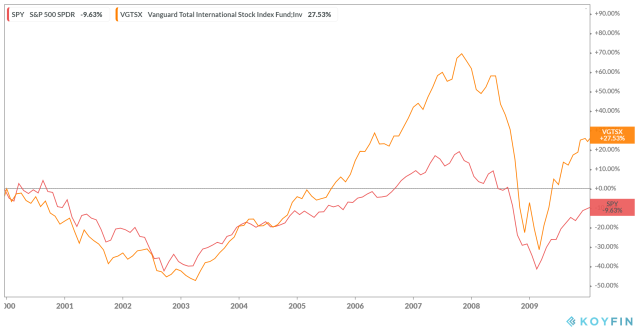 And if the historical record is any indication, performance like we just saw in the teens is not typically followed by similar performance.

So spread your wings and diversify. There’s a chance that this will be the wrong course of action, but the probabilities say otherwise. There’s also a chance that Tom Brady remains at the helm of the Patriots and stays as effective for the next ten years as he was for the last ten years. I just wouldn’t bet that way.

3 Responses to It’s Time For Predictions; I Don’t Play That