Posted on November 1, 2019 by Rich Gluck
Some say the world will end in fire,
Some say in ice.
From what I’ve tasted of desire
I hold with those who favor fire.
But if it had to perish twice,
I think I know enough of hate
To say that for destruction ice
Is also great
And would suffice.

On October 6, 1979 Paul Volcker declared war on inflation. It took several years, two recessions and a Fed funds peak of 22.4% before he won. History says that Volcker did the right thing. There were plenty of doubters at the time. I was not one of them. Perhaps I was biased, because I worked at the NY Fed. Still I had no doubt that Volcker was doing the right thing by using monetary policy to stamp out the fire of runaway inflation.

They knew how to tighten back in the day.

Today, central bankers have cut rates to the lowest levels in history. Much of the world’s government debt has negative yields. Lenders are paying borrowers; the world has turned upside down. You can, if you would like, lend Germany money today at -0.35% a year for 10 years.

Unlike forty years ago, I have my doubts. I don’t think monetary policy can free economies locked in ice. 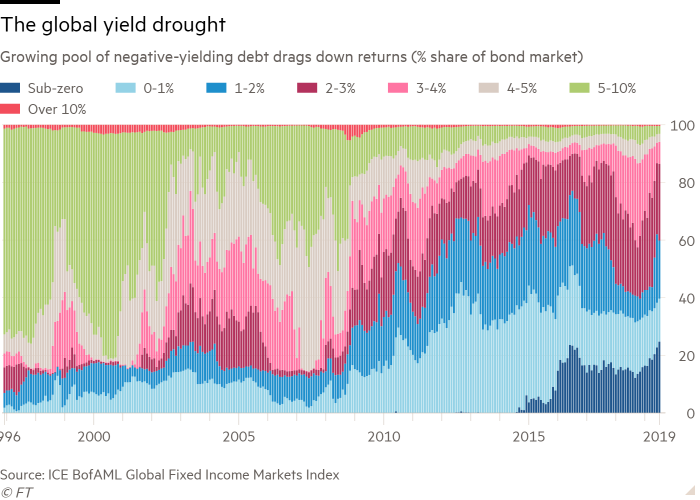 The problem, I believe, is that central bankers see symmetry where there is not. They think that the opposite of the inflation fight of my youth is true, that low and even negative rates will revive their economies. The evidence points in another direction.

These historically low rates have followed bank and credit crises in Japan, Europe and the US that left massive piles of debt in their wake. A result of such debt fueled crises has typically been a decade or more of slow growth, accompanied by low inflation.  Reinhart and Reinhart wrote “After the Fall” about these phenomena. And Richard Koo coined the term “Balance Sheet Recession” to describe economies where excessive debt leads to a shortfall of borrowing for investment despite low rates.

The preferred policy to deal with debt overhangs in Europe and Japan has been to allow banks to use cheap financing from their central banks to roll over loans to zombie companies. The hope is that banks earn enough profits over time to write off their non-performing loans. This is known as “extend and pretend”. In countries that use bond financing, like the US, low rates help zombie companies service their unsustainable debts directly. China is administering the same medicine to its many zombies. This is facilitating an ice age. It allows for overcapacity that helps keep inflation and rates low.

During the Global Financial Crisis, central bank support prevented banking system crashes. That made sense, because banking system crashes could have led to Great Depression, the sequel. But, as Neil Young put it in From Hank to Hendrix: “The same thing that makes you live can kill you in the end”. Monetary policy might no longer be effective. Persistently low and negative rates are leading to some chilling effects:

The problem of reviving growth is not going to be solved by lowering rates further.  Perhaps it’s building infrastructure in the US. It could be tax cuts that deliver their benefits to those who will spend the proceeds rather than those likely to save the windfall. Maybe it’s ending the subsidization of zombie companies in China that build manufacturing capacity that no one wants or needs. The Germans could raise wages or grant workers tax cuts. They have the surpluses to do so. Whatever it is, it’s not going to be the medicine we’ve been taking for the last decade.

Monetary policy has been almost the sole policy used by developed countries to support their economies since the Global Financial Crisis. It’s time to take a different tack.