I am an advisor with a past, a past managing global bond funds. For over twenty years, I invested in a vast array of markets and bond sectors around the globe. These included sectors like high yield and emerging markets that could be as volatile as equities. Did I mention that there were multiple currency exposures too? As I did this I learned to insure against the possibility that the world wasn’t always going to turn out the way I thought it would. This often meant holding assets like government bonds of longer duration than most individuals might find comfortable. Why? Because long duration means high interest rate sensitivity and that is what you need when the world turns upside down. Sometimes other assets can play this role, but not always in a reliable fashion.

In order for an asset to act as an effective counterweight to the riskier parts of your portfolio it should zig when they zag. That property is called negative correlation. The government bonds of major countries are pretty reliable in this regard. US treasuries, German bunds and Japanese government bonds were negatively correlated to the S&P 500 during the 15 year time period of the chart below. 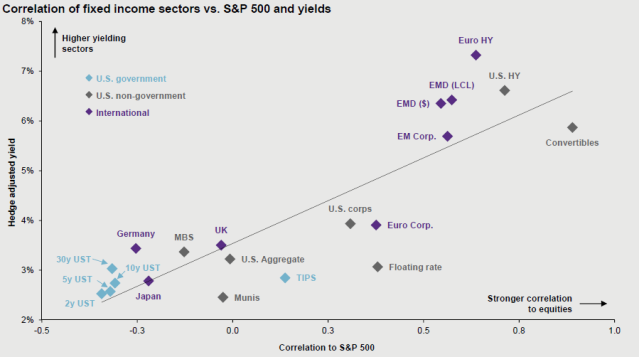 And you can see that long US treasuries did act as an offset during the stock market selloff in late 2018 and in the spring of 2019.

As a US investor, sticking to treasuries for this role usually makes sense. High quality mortgages were also negatively correlated according to the chart, but their duration drops and your holdings shrink as mortgagees refinance. That limits their effectiveness as a hedge in fraught markets. Caution is the watchword when using other assets because correlations and circumstances change. During pronounced selloffs almost all assets go down together; their correlations tend towards one.

The chart points to currency hedged Japanese and German government bonds as other potential crisis hedges. Aside from the difficulty an individual or their advisor would have in implementing those positions, they may not work in all circumstances when the US sells off. Markets can and do decouple due to local issues. At the moment, the Bank of Japan is tightly controlling the entire Japanese government yield curve, making it unlikely that the JGB market would be helpful in a crisis. During the global financial crisis, the Japanese yen (JPY) was a fantastic offset against most risky assets. That had to do with the fact that Japan was a net supplier of capital to the world. Recently, the JPY has not been as effective a diversifier for global portfolios. I guess it takes a global crisis…

Gold is often proposed for this role, but despite its cheerleaders, it has not been very reliable as a risk offset. It has helped only twice since 1971, when Nixon ended dollar convertibility. Both times real — (inflation adjusted) — interest rates had turned negative. Should the current bond market rally lead to negative real rates in the US, it is possible that gold will shine once more. See my earlier analysis of gold here.

This is not to say that you should always be long duration. The treasury rally since last October does make me wonder whether long duration exposure is worth maintaining. It is simply that during times of reckoning, long duration government bonds have been the most reliable diversifier out there.