Home Is For Your Heart, Not Your Portfolio

A number of years ago I took over a portfolio that held corporate bonds from both developed and emerging markets. As I looked through the holdings a name popped out at me, Ipiranga. I turned to my credit analyst and said something like: “Hey Mike, what the hell is Ipiranga? I never heard of it.”

I had been investing globally for ten years, but my focus was on sovereign bonds or sovereign linked bonds up until then. I bought the bonds of utilities, banks or telecoms that would be supported by the government if trouble came calling. Ipiranga wasn’t that kind of company.

Ipiranga is a gas station chain in Brazil.  Its credit was fine, but as Mike pointed out: “We’ll have no trouble selling it if you want, because there’s one on every corner in Brazil. The locals would be happy to take it off our hands”. Brazilians were doing what Peter Lynch once recommended, buying what they knew. There’s more to his recommendation than that, like the fundamental research part for instance, but that is what people remember.

My father did the same thing, he bought the high yield bonds of Getty because he knew the name. It worked out fine, but he knew nothing about it. He probably wasn’t aware that Getty wasn’t Getty the integrated oil company anymore.  It was the newly assimilated name of Powertest, a gas station chain from Long Island that bought Getty’s stations and name from Texaco. My dad was just another local that recognized the name because he saw the stations on every corner.

There’s a name for this. It’s called “Home Bias”. You invest in what you know and you’re comfortable with. It gets better. Within the US, there’s regional bias. People from out west buy tech, in the industrial heartland they buy industrials, southerners buy energy and northeasterners own financials. 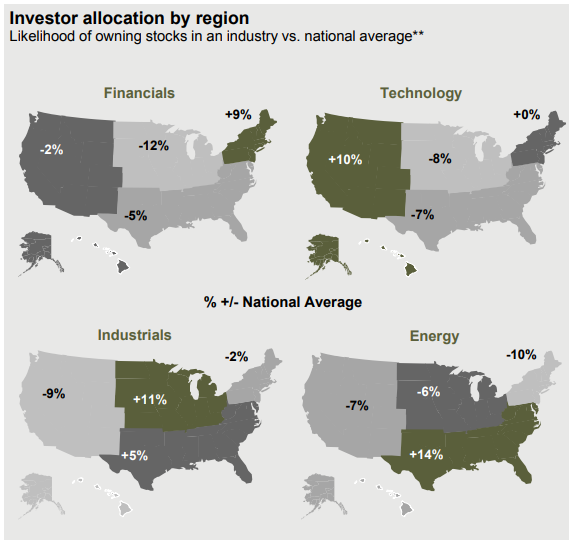 Some of this is thrust upon people. They own shares or options in their employer. Some of this is intentional. You may be an engineer in Silicon Valley with an intimate knowledge of tech. You buy what you know. Some of this is, unfortunately, assumed knowledge. You see the station on the corner or your neighbors all work in finance.

If you do know an industry and can do the analysis, you may have an edge. By all means tilt your portfolio in that direction.  Just don’t go all in if you work in or own a business in that same industry. It may look cool in the World Series of Poker, but won’t be if your children’s education or your retirement is riding on a bet that goes south.

Don’t be myopic. There’s a world of opportunity out there.  Most people stay too close to home.

Diversification works when you spread your bets all the time. You, I and everyone else have little idea when particular companies or markets will do well or poorly. By the time most folks are aware that a market is moving, they’ve missed half the ride. If I want to take a transcontinental train, I’d prefer to board in New York or San Francisco, not Kansas City.

If you get and stay diversified you’ll reap the rewards of each asset class when it’s most likely to help you. You may not pick the overall winner, but you will avoid the fate of the average investor.