Another House, Are We Nuts?

We’re buying another house. We sold the last one in August 2017. Serendipitously, we sold before the new tax bill laid waste the deductions homeowners in high tax states held so dear. At first we thought: “We’re home free. Prices should fall. Maybe we should rent for a year or two and see how things play out”.  Then we looked at rentals. Apartments, too small. What if the kids come home and where am I going to put all my bikes?* Houses, very expensive, in terrible condition, or too far from where we want to be. So, we’re buying another house, but does this make economic sense, especially given the new tax bill? The answer is that it might.

The keys to whether it does are:

The new tax law ought to have a one time negative effect on housing in high-tax areas. It raises costs permanently. The market should adjust for that and it probably will.  Then, the question becomes, what happens to the trend of the housing market in high tax states?

The answer may lie with the many countries that don’t subsidize housing through their tax systems. Canada, for one, does not. Its housing market largely tracked the US market in real (inflation adjusted) terms from 1975 until the global financial crisis. So, if owning a house is desirable, subsidies or no, prices will appreciate. (You’ll notice that Canadian houses outperformed spectacularly post-crisis. That’s not the subject of this post, but let’s chalk it up to loose monetary policy and no mortgage crisis up north.) 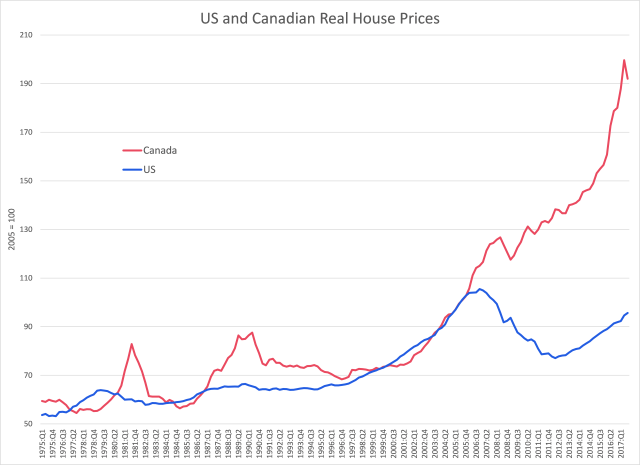 Another point is that the new tax is not all bad news. Residents of high tax states who are losing deductions are often the same people who are gaining from lower marginal tax rates and favorable changes to the Alternative Minimum Tax. Mortgage interest also remains deductible for new mortgages up to $750,000.

The global financial crisis (GFC) was built on US homes and wonderfully (scarily) inventive ways to finance them. Since the GFC, many fewer homes have been built than would have been in a typical recovery. Housing starts have recently risen to 1.2 million a year, which, from the blue line, look like they are approaching a normal level, but that is an illusion.

The red line shows that we are woefully short of new housing relative to population. Apparently, we are also woefully short of workers in the building industry and of starter homes. Infill building and teardowns, which is what goes on in developed areas like the Northeast, is profitable only if you’re building luxury homes. Land costs, I suspect, have a lot to do with it.

Combine the lack of building with the Millennial generation, now 22-37 years old, hitting prime home buying age and you get upward pressure on prices.

Let’s just say that the lack of supply, combined with a large generation entering its prime home buying years, will lead to upward price pressure in markets like the Northeast.

Cost and Benefits of Homeownership

When you buy a house, you combine a down payment with a mortgage to finance the purchase. Over the years you pay taxes, interest and maintenance. You make capital improvements, some voluntary, the kitchen you always wanted, some not, the new roof.

The financial benefits you get are the equivalent rent you would have paid and, potentially, tax-free capital gains.

In “Homeownership and the American Dream“, Laurie Goodman and Christopher Mayer of the Urban Institute work with data representing the costs and benefits listed above to conclude that a representative American house bought in 2002 and held for at least 3 years would have outperformed the S&P 500 even without accounting for tax benefits. With tax benefits included, the home naturally does better. There are some data for individual cities. New York had an annualized return of 2.7% from 2002-2016, whereas Cleveland’s annualized return was -0.2%, illustrating that home ownership does not make sense everywhere at all times.

The study may overstate the performance of housing, e.g., picking a start date in 2009 would have had the S&P outperforming, but it does illustrate that owning a home can make financial sense.

A longer term study published recently, The Rate of Return on Everything: 1870-2015, has real long-term US housing returns at 6.3%. While that would be almost as good as equities, housing results vary markedly by location in the US. You’re likely to have had better results in New York, which is land-locked and has been able to change as the US economy changes, than parts of the US that have been abandoned by industry with no rebound in sight.

We realized that because of:

it made sense to buy another house.

* It is known among cyclists that the optimal number of bikes to own is n+1, where n is the number you currently own. The minimum n=3.