Bonds: Is a Massive Selloff in Order?

The other day there was a video clip in my Twitter feed from a strategist who stated on CNBC that rates were going much higher in the second half of this year. He went on to say that those who had bought long duration bonds were pigs being fattened up for slaughter or something to that effect. Aside from reminding me why I don’t watch “bubblevision”, it made me think about how high the 10 year benchmark treasury could go in the current environment.  Big reveal: the answer to the question posed in the title is no. We’ll probably end the year higher than the 2.27% of today, but not as high as some might think, especially that guy.

I’ve never cared about forecasts per se, but about the thinking that goes into them. I believe that when you’re thinking about what can happen, you should have a process that is grounded in reality.  You want forecasts that are within the realm of possibility rather than continually calling for Ragnarok. Ragnarok in the financial markets happens more often than it should in a log normal world, but far less often than the would be Jeremiahs on bubblevision want you to believe. Ragnarok as your central case wreaks havoc on your ability to invest rationally. Let’s leave it aside.

My current belief is that the 10 year note will end the year around 2.5% or roughly about 25 basis points higher than now.  Such a yield would cause about a 2% loss on a 10 year security held for the next 6 months. That’s bad, but not enough to cause long duration holders to puke, as the saying goes. So, how did I get to that conclusion?

Longer US rates are driven by inflation, growth, Fed policy and the actions of market participants. Core inflation, what the Fed believes it can influence via policy, is subdued. Business has little pricing power, which may be a reason behind the levering up of corporate America. If you can’t raise return on equity via pricing or growth, you can improve it by decreasing equity and spreading the jam a bit thicker on the remaining bits. (The latter, friends, is a story for another post.) 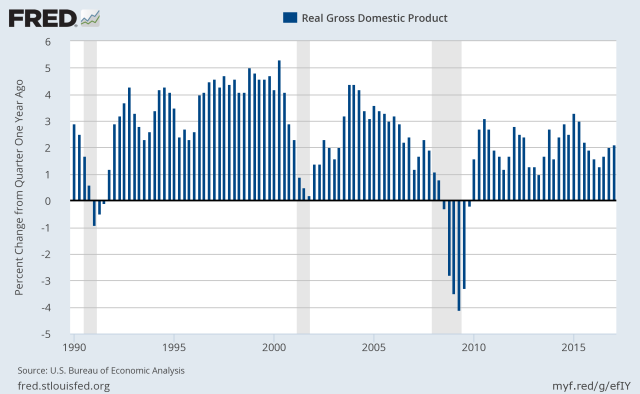 Growth has been anemic 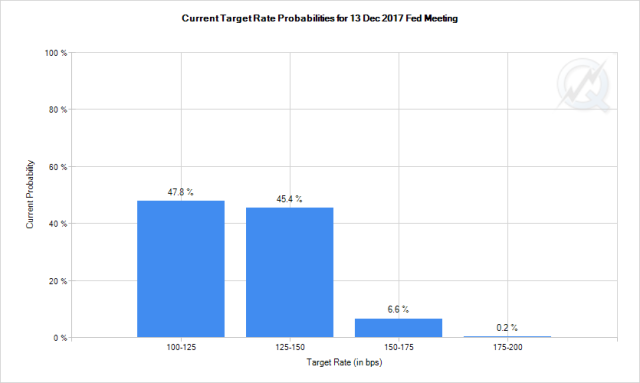 The FOMC publishes its members’ forecasts alongside its post meeting statement. They are in line with the market for the Funds rate at year end. Inflation and GDP growth projections concur with recent experience too. No surprises here.

To help forecast the 10 year rate, I invoke two relationships on the yield curve, the line formed by plotting treasury yields from the 3 month bill out to the 30 year bond. The first relationship is the difference between the 2 year treasury note yield and Fed funds. It’s called 2s-Funds.

Twos-Funds tends to anticipate Fed moves. When the Fed is about to raise rates the 2 year typically sells off in anticipation.  Further down the road, the 2 year tends to shadow the Funds rate with a small premium. It will fall below the Funds rate when monetary policy is truly tight; we’re not there yet. The current premium of  0.2% or 20 basis points (BP) is pretty normal, given the one rate rise expected later this year. Assuming that small premium is maintained, the 2 year would end the year around 1.58% or 20 bp over the 1.38% Fed funds rate projection for December. 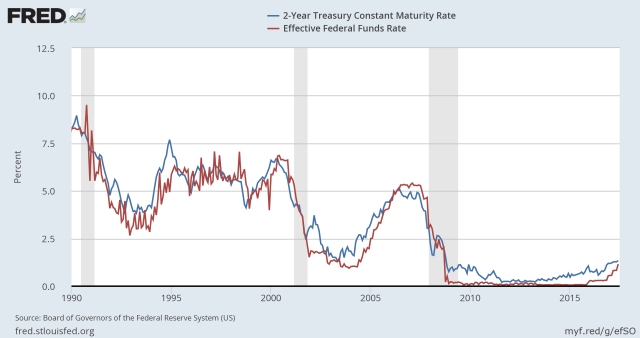 Twos-10s has been narrowing as expected.  Yeah, yeah, the Jeremiah bullfrogs have been croaking about inversion and recession. Ignore them. This is normal for this point in the cycle. 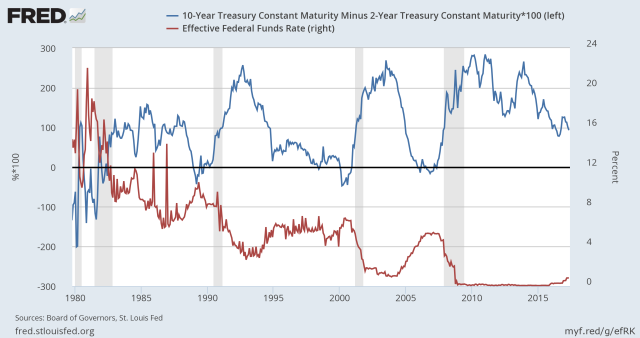 Where does this leave us? As of today, 2s-10s is about 90 bp. Adding that to 1.58% plus a little rounding gets us to 2.5% for the 10 year note yield at the end of the year. If growth is anemic and inflation subdued, perhaps we are at 2.25% come New Year’s Eve. If growth accelerates and inflation does too, 2.75% could be it.  Add another 25 bp to get to 3% if you’re really bullish on the economy or inflation. I wouldn’t get too aggressive, because the more Fed tightening that gets built in, the more likely that 2s-10s flattens further.